Skip to content
Social media seems to be awash with misinformation (not surprising) related to COVID-19 because it is the biggest issue the world is involved in right now. The global pandemic is forcing countries to bring in radical changes in communities. With people constantly talking and speculating about it, rumors and conspiracy theories have started to circulate all over the internet. We’ve compiled the most popular COVID-19 myths, conspiracy theories and addressed them with the information provided by credible sources like CDC and WHO. Get ready to be shocked.

It is not news that the latest generation of cellular network technology, 6G has caused lots of conspiracy theories previously. Now that COVID-19 is the global pandemic right now, conspiracy theorists have claimed that 5G is contributing to its spread: either by affecting people’s immune systems or by transferring the virus. Celebrities like Woody Harrelson have endorsed the theory and sadly, arsonists have set fire to several 5G antennas in the UK.

Can 5G transmit the virus? No. Centers for Disease Control and Prevention (CDC) describes the transmission process as:

“The virus is thought to spread mainly between people who are in close contact with one another (within about 6 feet) through respiratory droplets products when an infected person coughs or sneezes.”

5G is basically a spectrum of electromagnetic waves – not droplets. Viruses can survive for some time outside of a host but that’s for a short period. In COVID-19’s case, it can survive up to 72 hours on plastic or stainless steel surfaces. There is no research evidence to suggest that radio waves can transmit the virus. 5G towers cannot sustain the virus for a long time either.
5G has been often linked with weakening immune systems but according to the World Health Organization:

“To date, and after much research performed, no adverse health effect has been casually linked with exposure to wireless technologies”.

Also, CDC has declared 5G to be fall under the non-ionizing portion of the electromagnetic spectrum which means that waves don’t have the power to damage any cells. 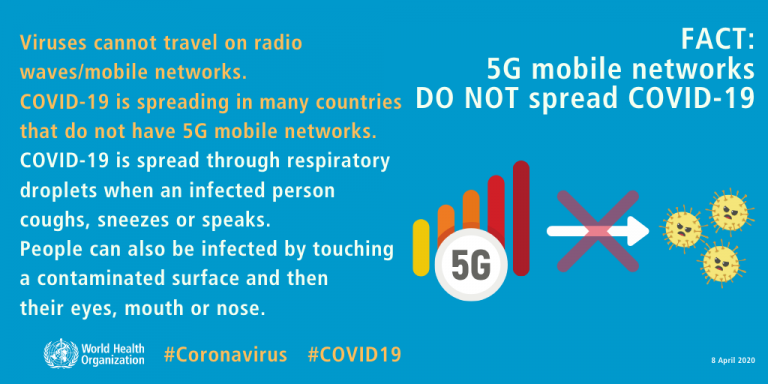 A distinguished and old medical journal called The Lancet published a letter in which it hypothesized that ibuprofen and similar anti-inflammatory drugs can elevate the risk of coronavirus infection by prompting an increase of ACE2 – an enzyme. On top of this, the French Health Minister Oliver Veran gave this hypothesis an official backing by warning people against the danger of ibuprofen with a tweet.
But really, the ibuprofen hypothesis was exactly that – a hypothesis. The Lancet letter wished for an investigation of the effects of drugs that could spur an increase in ACE-2. Michael Roth, one of the involved researchers later said:

“The letter does not constitute a recommendation to use certain drugs or not. Patients should always follow the instructions given by their physicians.”

Myth #3: COVID-19 Is a Biological Weapon That’s Made in a Lab

Conspiracy theorists have a flair for drama and what could be more dramatic than learning that COVID-19 was made in a lab, it was an experiment gone wrong or it was released in China intentionally. According to a Pew survey, 23% of Americans believe it was made in a lab and 6% think it was made by accident.

It may be intriguing to imagine that COVID-19 was created by a government, but science tells the truth that it came about through natural selection. In a study published in Nature, researchers were able to analyze the structure of the virus to get insights into how it evolved and whether it was built in a lab. They studied the virus’s ability to bind to ACE2 – an enzyme found in the heart, lungs, and other organs. The researchers noted:

“Computational analyses predict that the interaction is not ideal” and that the combination of high affinity with room to improve “is most likely the result of natural selection on a human or human-like ACE2 that permits another optimal binding solution to arise. This is strong evidence that SARS-CoV-2 is not the product of purposeful manipulation.”

The study notes that for the virus to have been man-made a previous human-compatible coronavirus would have been used as a foundation. However, the genetic data strongly indicates that it was not derived from any previously used virus backbone.

Myth #4: Vitamin C, Bleach and Supplements Are the Cure

People can get desperate to find a cure and social media with its lack of fact-checking has become a breeding ground for rumors of false cures and miracle treatments. President Donald Trump also floated a dangerous idea of exploring whether injecting disinfectant into the patients can cure them.

Bleach is wonderful for disinfecting household surfaces but not a body. Vitamin C is also well known for boosting the immune system and now, people are claiming huge doses of Vitamin C can cure the virus. Peter McCaffery, a biochemistry professor wrote in The Conversation that Vitamin C is important for us; it is unlikely to prevent or cure COVID-19 infection. 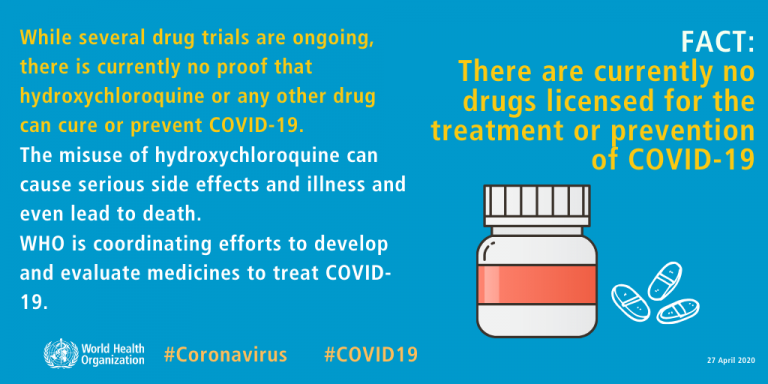 Myth #5: Spraying Alcohol or Chlorine On Skin Will Kill the Virus

Applying chlorine or alcohol on the body can cause severe harm especially if it enters the nose, mouth, or eyes. People use these as a disinfectant and they should not be used on the skin. Nor is there any study to suggest that these can kill viruses in the body.

Myth #6: Children Can’t Get the Coronavirus

All age groups can contract COVID-19. Most cases have indeed been in adults but children not entirely immune to it. Preliminary evidence suggests that children are just as likely to contract it but their symptoms are less severe.

While the illness has flu-like symptoms like aches, fever, and a cough, it is much stronger than flu. In some cases, it can be fatal after leading to pneumonia. Covid-19’s overall profile is very serious and the mortality rate is between 1%-3% – which is much higher than seasonal flu.

Myth #8: Cats and Dogs Can Spread the Virus

Right now, there is very little study and evidence to suggest that the virus can infect dogs and cats. However, in Hong Kong, a Pomeranian contracted the virus from its owner. The dog did not show any symptoms. There is a debate going on among scientists over the importance of this case. Professor Jonathan Ball of molecular virology at University of Nottingham, UK, says:

“We have to differentiate between real infection and just detecting the presence of the virus. I still think it’s questionable how relevant it is to the human outbreak, as most of the global outbreak has been driven by human-to-human transmission. We need to find out more, but we don’t need to panic — I doubt it could spread to another dog or a human because of the low levels of the virus. The real driver of the outbreak is humans.” 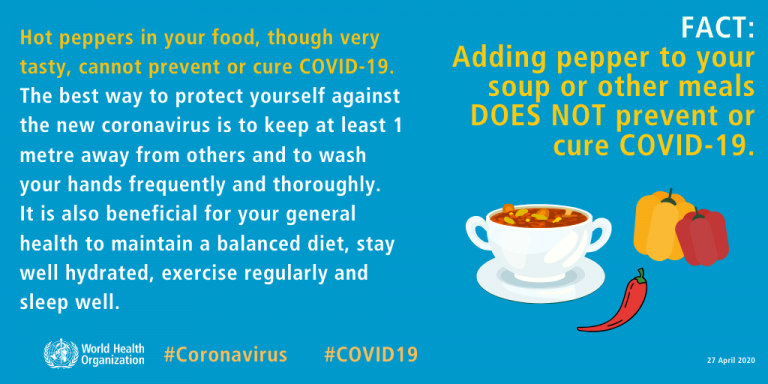 Whether it is 25C or more, you can still contract COVID-19. Countries with hot weather conditions have reported coronavirus cases so this is a myth. The key is to not touch your face, wear a mask, and wash hands often to prevent the virus.

Myth #12: Ability to Hold Breath for 10 Seconds Indicates NOT Infected

Infected people display symptoms like cough, fever, and aches. Some severe cases form pneumonia too. The best way to confirm the presence of COVID-19 is a laboratory test. It cannot be confirmed with a breathing exercise according to WHO.

It is important to follow only credible authorities like CDC and WHO when trying to learn the preventive methods of COVID-19. Also, since the internet is full of misinformation, it is a serious responsibility to fact check everything related to COVID-19 before passing it forward to our friends and family. Spreading myths, rumors, and conspiracy theories without fact-checking will increase the panic – something that the world does not need more of. Share this if you found this blog helpful.

Get Ready To Transform Your Organization For
Value Based Care. 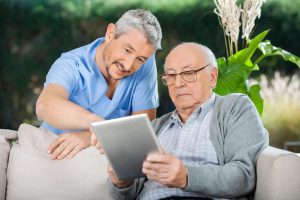 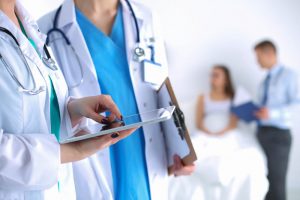 How Effective Intrahospital Communication Is Improving Healthcare and Cutting Costs 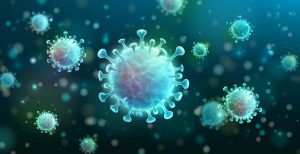 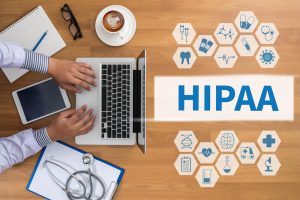